Amigos Bravos is working to hold the dairy industry accountable so that
New Mexico’s drinking water will be safe for future generations.

New Mexico has 131 dairies, with the largest average herd size (about 2,900 per dairy) in the nation. According to New Mexico State University (NMSU), In the last several years, New Mexico has become a national leader in cheese and milk production. It’s averaging 685,051,125 pounds of milk per month and a total of 8,220,613,505 pounds in 2018. This calculates more than 164,000 tanker loads of raw milk a year generated in the State of New Mexico alone. 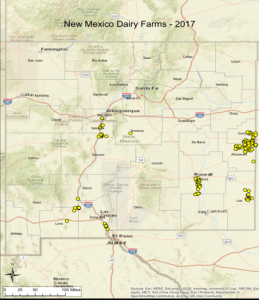 New Mexico has the highest average number of cows per dairy in the country, with over 2,000. These factory farms, also known as Concentrated Animal Feeding Operations (CAFOs), are not like the image the dairy industry wants to sell you: clean happy cows grazing far apart on lush green meadows. The truth is, dairy cows in New Mexico live in crowded conditions, walking in their own manure and getting constant injections of antibiotics to increase milk production and keep down disease.

Dairies are required to capture wastewater and store it in lagoons for use as nutrients for nearby crops or to evaporate. For decades, these lagoons were lined with manure itself, then with clay, both of which are known to leak dangerous levels of nitrates and pharmaceuticals into the ground and into drinking water aquifers.

The contaminants entering New Mexico’s drinking water supply pose a number of risks to water quality and public health. In addition to Nitrates, E. coli and Salmonella, other pathogens, hormones, and antibiotics are entering into our drinking water.

In 2009, the State Legislature ordered the NM Environment Department to create a dairy industry-specific rule for protecting groundwater from dairy industry waste. When the dairy industry realized that they were not going to be able to write the regulations themselves and that residents in dairy country and environmental groups – including Amigos Bravos – were also going to participate, the dairy industry fought creating the new rule for almost three years.

Amigos Bravos is Watching the Watchers

The Dairy Rule finally went into effect in January 2013. It is intended to make it easier to monitor dairy waste and improve waste management practices.

Investigating all the permits being issued by the NM Environment Department for over 130 dairies and checking to make sure they follow the Dairy Rule is an extremely time-consuming process. When Amigos Bravos finds violations, we need technical and legal assistance to support a challenge against the permits and the state agency. This is one of the many Amigos Bravos projects where your donations help!

Amigos Bravos plays an active role in the New Mexico Dairy Coalition (NMDC), monitoring dairy permits and offering technical and/or other assistance to the coalition, including coalition building. Our participation in this coalition is an opportunity to create stronger ties to the Southern New Mexico and the New Mexico agriculture industry through voice and presence.

Currently, Amigos Bravos is working with the NMDC to  monitor and respond to PFAS (Per- and Polyfluoroalkyl Substances) contamination at southern New Mexico Dairies. PFAS are a group of chemicals that have been linked to reproductive and developmental problems as well as cancer. These pollutants have been contaminating groundwater at dairy farms near both Cannon and Holloman Air Force Bases as a result of foams used in firefighting exercises on the military bases. The NMDC is engaged in working with the NMED to find solutions to this problem and forcing the Air Force to mitigate it.